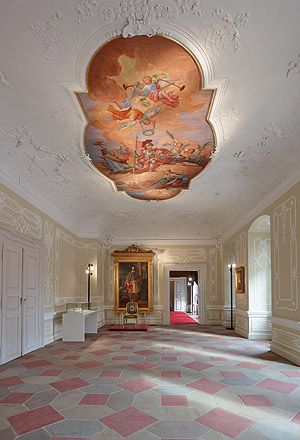 After the departure of the Bavarian government in 1919, for the first time in its long history the New Residence lost its primary residential and state functions and acquired a new use as museum. There had however already been attempts before this to present the collection, and individual gallery rooms had been open to the public and experts by appointment since the beginning of the 19th century. In the 1920s the first overall museum concept was drawn up, and in 1932 the exhibition in the three state apartments was opened.

By contrast with the Residences in Aschaffenburg, Würzburg and Munich, the New Residence of Bamberg was spared damage in the Second World War. Today treasures spanning over four hundred years from the Late Gothic to the Historicist era are on display in almost 50 rooms of the huge building with its interiors from the late 17th and 18th centuries.

In addition to the Residence in Munich, as a property for which the Bavarian Palace Administration is responsible, the New Residence has one of the most comprehensive historical inventories, including well over 500 items of furniture. The State Gallery of Bamberg (Old German and Baroque sections) are open to the public as well as three furnished historical apartments. Since 1965 the New Residence has also housed the Bamberg State Library and although it is no longer the political centre of Bamberg, it is certainly one of the most important cultural centres of this World Heritage town.